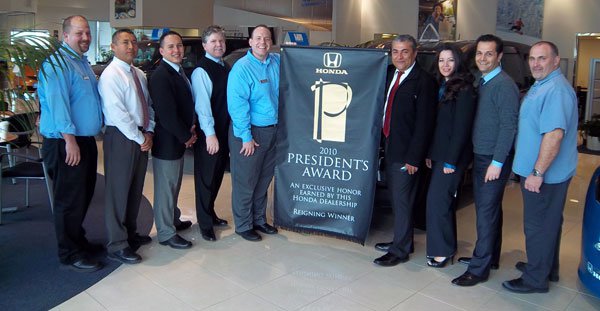 MISSION HILLS, CA, April 6, 2011 – Galpin Honda has received the Honda President’s Award for 2010, one of only 118 American Honda dealerships (out of more than a thousand which competed) to achieve the standards of excellence in four areas of operation – customer service and satisfaction, sales, training and facility.

The award program is revised annually to address the current market environment and to encourage dealerships to continually strive to achieve higher levels of customer satisfaction.

“We are elated!” said Edik Hartoonian, Galpin Honda general manager. “The President’s Award is something we’ve worked diligently to achieve for four years. We got very close each year, and the Galpin Honda team really came together and accomplished it this time.

This is the result of a real team effort. It took every single employee to win this award. Each of us continued to focus on serving our customers the best we could, striving harder day after day. Our team effort succeeded, paying off for our customers first!”

Since its inception in 1995, the President’s Award has recognized top dealers who are unwavering in their pursuit of excellence and customer care.

“The Galpin Honda team has proven their dedication to their customers by achieving the rigorous standards established for this award,” said John Mendel, executive vice president of automobile sales for Honda. “We are extremely proud of their accomplishments.”

Galpin Motors owner-president Bert Boeckmann was equally enthusiastic in his praise of Galpin Honda’s success. “My family and I have always appreciated the management style and work ethic of Ed Hartoonian,” Bert said. “His team at Galpin Honda reflects those qualities and the very best of Galpin Motors. We heartily congratulate our Galpin Honda team. They truly deserve the 2010 President’s Award!”

"Earning this top award in such a short time since Galpin Honda began operations is really phenomenal," added Vice President Brad Boeckmann. "Everyone at Galpin Honda has our greatest admiration and appreciation for their efforts."